The dogs pictured are not for sale, they are our personal
​pets and used in our breeding programs.

Miniature Toy Schnauzer 11 lbs.
Mega-Coat, w/ticking & Green Eyes
AKC, CKC, OFA, Dna-profiled,
Gizmo is very laid back, sweet and loving, he
likes to give a Yoodling little howl to greet
us when we come home or just to tell
us he wants something!
The Liver Parti
The Chocolate Parti also known as a Liver Parti Miniature Schnauzer is because of a gene dilution of black which give this dog its brown based color. Though considered a "rare" color, it has existed in original German breeding lines since the 1800's when the breed was first developed.

​It was in the winter of 2004 on December 1st when the first BIRO Yorkshire Terrier puppy was born, a female called "Art of Highclass Relight My Chocolate Fire", to the Art of Highclass Kennel of famous German breeders Roberto Krah and J. Lutz. It was this female dog that became the first registered representative of the BIRO Yorkshire Terrier breed in the World. The mother of the puppies was "Alisha vom Wasserschlößchen" that gave birth to four puppies. Three of the puppies were Biewer Yorkshire terriers, and the fourth puppy was a female BIRO Yorkshire terrier, who had a chocolate pattern on a white coat instead of the typical black/blue pattern on a white background with a tricolored head.

Yorkshire Toy Terrier 3.5 lbs.
AKC, IBC, AMTC, OFA, DNA-profiled
Simba has a very nice thick black and gold/tan coat
that will be a nice silky dark steel gray as an adult
and is quite cute as a button. This friendly
​fella has personality plus!
The Yorkshire Terrier
A small dog breed, terrier type developed during the 19th century in Yorkshire, England. The breed hails from three different breeds; the Paisley Terrier, the Scotch Terrier and some believe the Maltese were the contributors to the Yorkie. But some time in the 1860s a dog named Huddersfield Ben living in Yorkshire was seen at dog shows throughout Great Britain, and has defined the breed type for the Yorkshire Terrier we know today.

Maltese est. to be 6.5 lbs as adult
AKC
Mr. Frosty comes to SMM-Ranch from West Virginia.
He is a sweet, lovable & playful boy who is super smart
that loves to jump and get belly rubs with Champion
bloodlines back to CH Barbarella's Ready Set Go.
The Maltese
The 'ideal' Maltese should have black points and halos. Halos is not mentioned in any Maltese breed standard but it is actually there, just in a different wording - black points. This refers to the eye rims, paw pads, nose and lips and they should be a solid black without any other color (not fading, pink or otherwise). Lot's of pet Maltese dogs do not have 'perfect' black points which are ideal for the show ring and highly sought after in the competition crowd.

Halos - are solid pitch black, that circle around the entire eye without any fading or disconnection. They give the appearance of having large eyes and look like the Maltese is wearing black liquid eyeliner. These solid dark rims are not as common as you would think.

No Halos - a Maltese does indeed have colored eye rims, however, they are not a deep black color as can be seen on the nose. They appear to look a dark grey in appearance and don't have the look of wearing black liquid eyeliner. 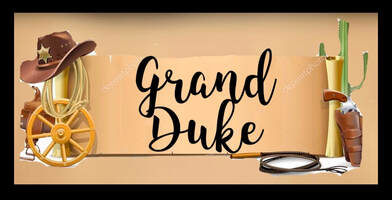 Miniature Schnauzer est. to be 11 lbs
Liver & Black Carrier
AKC
Grand Duke, is offspring of Gizmo & Bella and is
a small handsome lil fella. Follow us here
for his milestones as he grows up!