The Maltese Terrier, "Ye Ancient Dogge of Malta," has been sitting in the lap of luxury since the bible was a work in progress. Famous for their show-stopping, floor-length coat, Maltese are a toy breed with long, silky white hair and are playful, charming and cherished by families and quite an adaptable toy companion.

With its immense charm and eye-catching looks - an irresistible face - with their big dark eyes and black lil nose - they can conquer the most jaded sensibility. They make great alert watchdogs who are fearless in a charming toy - dog way! Maltese are low-shedding and considered hypoallergenic long-lived, and happy to make new friends of all ages. They can sometimes be stubborn and willful, but respond very well to reward-based-training. Coming from two Toy Parents they are the perfect pooch for Individuals and Families!
​
​Friendly and Social      Gentle and Spunky       Self-Confident       Bubbly and Playful
Where did the Maltese come from?
​Not surprisingly, the Maltese' "origin" stories vary according to the description of the Maltese and where they came from. They had a variety of names: "Ye Ancient Dogge of Malta,"  "Melitae Dog," "Roman Ladies Dog," "Maltese Lion Dog," "The Comforter," and the "Maltese Terrier." Today, is known simply as the Maltese.

Maltese - is older than history itself, a living artifact from a time when a civilization was defined by its myths, and when praying to a golden idol of a dog wouldn’t raise an eyebrow. It is stated that the Maltese descends from one of the most ancient dog breeds to be found in recorded history. Estimated that the breed originated around 600 B.C. with some written accounts of being 350 BC. That's over 10 thousand years ago!

The Maltese was recognized in 1888 by the American Kennel Club, its latest standard being from March 10, 1964. Tho' Parti-color and solid color dogs were accepted in the show ring from 1902 until 1913 in England, and as late as 1950 in Victoria, Australia. Colored Maltese could be obtained from the south of France.

The Maltese descended from a Spitz-like dog which was bred for hunting in marsh land areas. Historical evidence leads one to believe that the Maltese may well have been introduced into the gene pools of the Lhasa Apso, the Tibetan Terrier, the Tibetan Spaniel, and even the Pekingese - helping to shape - the eventual evolution of these truly ancient breeds of dogs. The earliest known representations of Maltese dogs on artifacts found at Fayum, Egypt (600-300 B.C.), suggest that the Maltese was one of the dogs worshipped by the ancient Egyptians. Maltese images were found on Greek vases dated around 500 B.C. and the first known written history of the breed was actually authored by the Greek philosopher, "Aristotle" around 350 B.C., where he attributed the origin of the breed to the "Island of Malta" in the Mediterranean Sea - hence the name "Maltese".

Maltese are a hypoallergenic breed known to be: Trusting, Lively, Docile, Fearless, Affectionate, Responsive, Sweet-Tempered, Playful, Easygoing, Active, Intelligent and Gentle. Males and Females generally weighing under 7 lbs full grown with 4-6 lbs being preferred, but generally can range in weight from 4-8 lbs. The Maltese is a breed that has the potential to develop genetic health problems and not all Maltese health issues are hereditary.'

Official Standard of the Maltese
​
General Appearance: The Maltese is a toy dog covered from head to foot with a mantle of long, silky, white hair. He is gentle-mannered and affectionate, eager and sprightly in action, and, despite his size, possessed of the vigor needed for the satisfactory companion.

Head: Of medium length and in proportion to the size of the dog. The skull is slightly rounded on top, the stop moderate. The drop ears are rather low set and heavily feathered with long hair that hangs close to the head. Eyes are set not too far apart; they are very dark and round, their black rims enhancing the gentle yet alert expression. The muzzle is of medium length, fine and tapered but not snipy. The nose is black. The teeth meet in an even, edge-to-edge bite, or in a scissors bite.

Neck: Sufficient length of neck is desirable as promoting a high carriage of the head.

Body: Compact, the height from the withers to the ground equaling the length from the withers to the root of the tail. Shoulder blades are sloping, the elbows well knit and held close to the body. The back is level in topline, the ribs well sprung. The chest is fairly deep, the loins taut, strong, and just slightly tucked up underneath.

Tail: A long-haired plume carried gracefully over the back, its tip lying to the side over the quarter.

Legs and Feet: Legs are fine-boned and nicely feathered. Forelegs are straight, their pastern joints well knit and devoid of appreciable bend. Hind legs are strong and moderately angulated at stifles and hocks. The feet are small and round, with toe pads black. Scraggly hairs on the feet may be trimmed to give a neater appearance.

Coat and Color: The coat is single, that is, without undercoat. It hangs long, flat, and silky over the sides of the body almost, if not quite, to the ground. The long head-hair may be tied up in a topknot or it may be left hanging. Any suggestion of kinkiness, curliness, or woolly texture is objectionable. Color, pure white. Light tan or lemon on the ears is permissible, but not desirable.

Size: Weight under 7 pounds, with from 4 to 6 pounds preferred. Overall quality is to be favored over size.

Gait: The Maltese moves with a jaunty, smooth, flowing gait. Viewed from the side, he gives an impression of rapid movement, size considered. In the stride, the forelegs reach straight and free from the shoulders, with elbows close. Hind legs to move in a straight line. Cowhocks or any suggestion of hind leg toeing in or out are faults.

Temperament: For all his diminutive size, the Maltese seems to be without fear. His trust and affectionate responsiveness are very appealing. He is among the gentlest mannered of all little dogs, yet he is lively and playful as well as vigorous.

Pics of Maltese Back in the Days 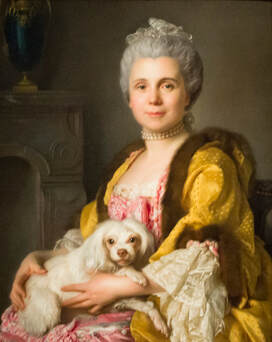 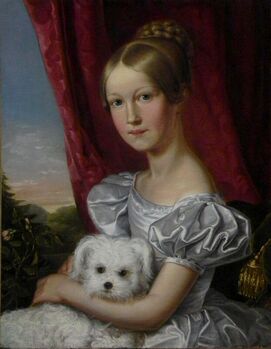 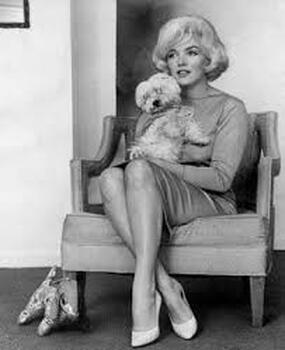 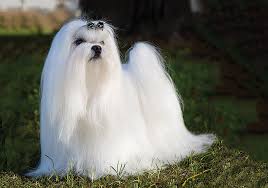 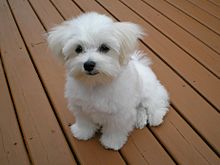 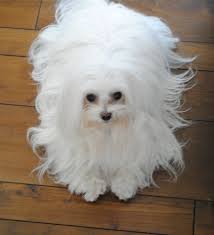 Maltese
These examples of different Maltese are not our dogs.